I wasn’t able to get a figure completed this week, as I found myself a bit buried in a number of different projects.
A couple weeks ago, I recived my shipment from Secret Weapon’s “Tablescape Dungeons: Mines” Kickstarter, and as rain and  humidity cooperated, I got them all spray primed.  This past week, I have been giving them their initial drybrush of Base Grey.  I’m using Dwarven Forge paints, based on their “How to Paint Dungeon Tiles tutorial, so hopefully they’ll fit in a little better with my existing DF stuff. 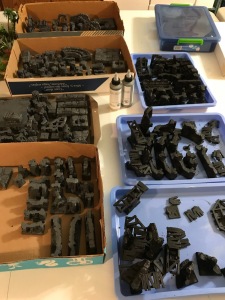 At the same time, I got a box of Perry’s plastic War of the Roses troops, and since I got back from Historicon I have been busy assembling them in preparation for priming and painting; because (fool that I am!) I signed up to run a game with them at our club’s regional con, BARRAGE, in two months!   So 40 of them need to get painted in 60 days!

Even with these projects going on, I have been duly working on my next Bones post, having made good headway on my next figure, Ingrid, Female Viking; from the Bones 2, Heroes I set.

I also got Goremaw, from Bones 3 Optional Rewards all washed, assembled, based, and ready to go.  I even got a first coat of purple slapped on him.

So I’m going to head back to the paint table now, and I will see you next Monday with my finished (finders crossed!) Ingrid!

via All Bones About It http://allbonesabout.blogspot.com/2018/07/project-avalanche.html
from Tumblr http://tumblr.hawks-club.org/post/176442490018
via IFTTT