Chris Palmer    We are starting our new Ghost Archipelago campaign this month, and I have chosen a Vine Warden to be in my crew. One of her spells is going to be Brambles, which creates a thorny hedge-like barrier, 6 inches long, 1 inch high, and 1 inch wide.  To make such a terrain piece to use for the spell effect, I borrowed an old technique I learned back when I was actively playing The Sword and the Flame Colonial era rules several decades ago: Colonial players would make models of Zariba, a real-life thorny barricade that soldiers and natives used in the Sudan as a makeshift defensive works, from luffa scrubbing sponges. 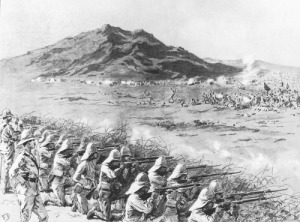 So I ordered a set of 6" luffa scubbers off of EBay for just a couple bucks.

Most of these have three central spines in them, and these were what I was going to use to make my Brambles markers from. I took one, and using my hobby knife, carefully cut out one of the central spine sections, leaving a base about an inch wide.

This is what you get when you cut out the section.  The first one is hard to do, and often comes out a bit uneven.  The other two are a lot easier since you already have the luffa opened up.

The part I intended to use as the bottom of the Brambles marker has a natural curve to it from the outside of the luffa, so the next thing I did was to use my hobby knife to cut a layer of the curve off, so the spine would sit flat.

I then gave the Brambles markers a good heavy coat of flat camo dark brown spray paint.   After the spray paint base coat was dry, I drybrushed some lighter brown and tan highlights.  When the painting was dry, I glued a a brown and green flock mix along the bottom to blend the edges in with the table top, and help the illusion that these were bursting up out of the ground. After that, I brushed some Elmer’s glue along the length of the brambles and sprinkled them with some coarse foliage to make patches of leaves on them along the “vines”.

I’m really please with how these turned out!  And I’m looking forward to using them to thwart my opponents in our campaign! 🙂

via One More Gaming Project http://onemoregamingproject.blogspot.com/2018/01/quick-and-easy-vine-warden-bramble.html
from Tumblr http://tumblr.hawks-club.org/post/169517199363
via IFTTT